by BOMBS OF HADES 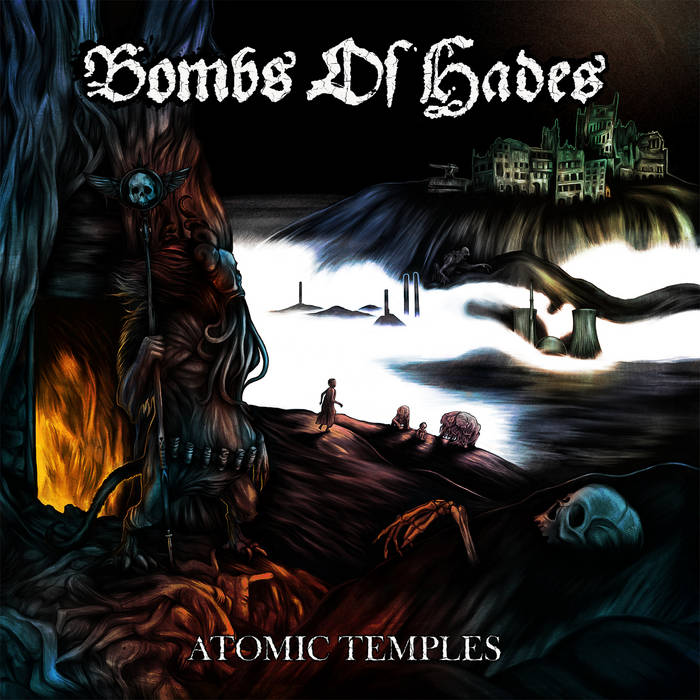 I feel comfortable having my death metal produced by Bombs of Hades. The group’s members were once involved with a handful of Swedish death metal bands that are historically legendary to the development and spread of the genre during its formative years—important factions like God Macabre, Abhoth, Utumno. At the very least, you can safely assume they know what they’re doing. “Atomic Temples” handles the same as Bombs of Hades’ other musical assaults, with the crust-stuffed filet of death metal still blistering and smeared with gore. “Atomic Temples” neither derails the consistent level of quality Bombs of Hades has been able to maintain nor throws a wrench into the band’s detonating design, and it’s safe to say these Swedish gentlemen spend most of the record sailing smoothly on the blood and pus of the damned.

Bombs of Hades’ style has been a blast of fresh air in the death metal world; the group takes an old-school, punk-laden direction that sounds natural and level, unlike clans of imitators who pander to the retrogressive course but screw it up. The band did not undergo any drastic changes since 2012’s “The Serpent’s Redemption,” obviously, so if you’re familiar with Bombs of Hades you should have a general idea as to what’s locked up inside “Atomic Temples.” The mending of embryonic death metal riffs into punky, crust-laden sections makes for a frenzied concoction that can probably be accurately envisioned by most, and that’s pretty much the course of action here. It’s nothing new, but the riffs are blazing, the D-beats are massive, the vocals are venomous, and the solos scorch and sear. Hard to complain when they do what they do so well.

A big piece of the album’s duration is consumed by roiling death metal anthems that kick down the door with heated riffs, raid the world, then leave shortly thereafter. Like an Entombed with a Motörhead attitude, it’s hard not to be caught up in the groovy lashings and intensity of songs like the punchy “Omens” and the boiling lurches of “Cadaverborn.” The apex of “Atomic Temples” is its eleven-plus minute title track, which is in a lot of ways a harrowing embodiment of Bombs of Hades’ skillset. It moves through blazing death metal sections, roasting units that burn slowly with crushing grooves, and an acoustic/flute segue that sounds oddly fitting for the experience in a completely natural progression of events. It’s brave and comfortable, not awkward or unjustified.

But speaking of the awkward and unjustified, there’s this annoying pause in the action called “Crawling Wind/The Tyrant Embryo” that serves no purpose whatsoever other than to lead into the title track. Its four minutes of sound effects are meaningless and, though intended to be a taster to the main event, add no depth to the album’s homerun. Other than that there’s little “Atomic Temples” boasts that can be seen as a hindrance towards the record’s quality. The performances are electric and dripping with attitude, and the sound quality is raw and meaty—essentials for death metal done right. Beyond the weak interlude, “Atomic Temples” comes from the same vein Bombs of Hades has been tapping since 2002, and I see no reasonable fan of death metal looking at this and pooh-poohing.