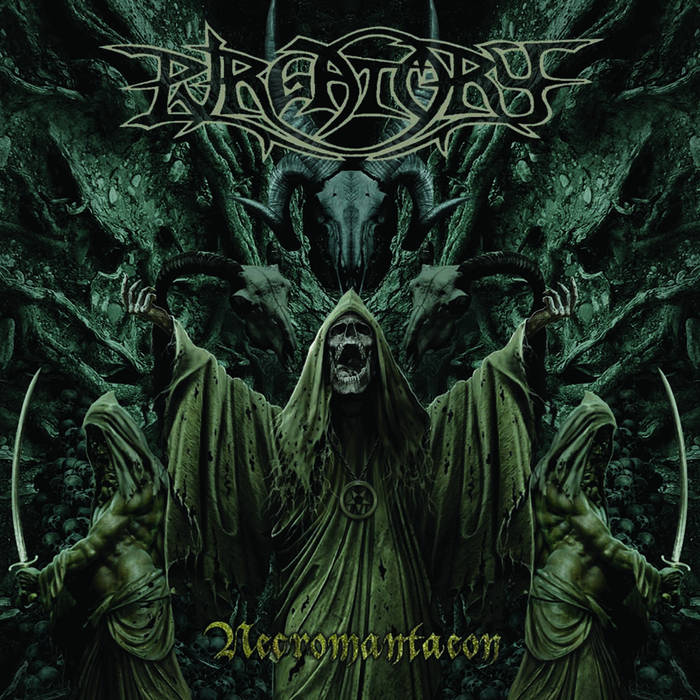 Germany’s Purgatory have released a new album, Necromantaeon, and it is easily one of my favorite new albums.

This is ballsy death metal that has that definitive German edge to it. I haven’t given the German death metal scene enough listening, but of what I can gather, there is a very interesting aspect about the vocal delivery that I just don’t know how to describe, but I’ve found it in a lot of the German bands that I’ve looked at, such as Fleshcrawl, Anasarca, and the like. Even with a very glossy, modern production, that edge is still there, and it makes this album quite fun to listen to.

This music just stomps right out of the gate and refuses to stop trampling upon your ears. Seriously, this is an excellently concise slab of death metal that understands how to get to the point and establish its presence. The riffs here are devilishly catchy, and in my opinion, the percussion really compliments the riffing style and the vocals well. Rhythmically, this is both brutal, catchy, and genuinely interesting, which is why it immediately caught my ear when I first heard it.

My favorite song here is the infectious ‘Glorification of the Lightbearer.’ That smooth-as-silk double bass work establishes the rhythm very well, with some very sexy riffs on top of it. That short solo near the two minute mark sets up the next vocal section incredibly well, and the next solo that follows is a great conclusion to that section of the song. Even with the melodic passages found in that section, the main motif of the song makes it incredibly fucking clear that this is a heavy-as-balls song. Color me impressed.

While I dig the entire album, one of my favorite parts is the vocals. Not only is the deep, German guttural sound executed perfectly, but the vocal trade off between the main vocalist and the guitarist is done very nicely, and their delieveries compliment each other very well. One has a very standard-fare, but well done set of death metal vocals, and the other has this menacingly deep guttural delivery that reveals itself most notably on ‘Downwards Into Unlight.’ Often times on the album, the vocalists harmonize, and since I’m a sucker for harmonized harsh vocals done well, of course I love this.

Overall, this is a great effort from Purgatory. While the modern sound will certainly be a bit of a turnoff to purists like me who actually like dynamic range and drums that don’t sound like plastic clicky things, the actual music itself will be damn satisfying to pretty much anyone who likes good death metal. This is ballsy, to-the-point music that has a perfectly concise running time (32 minutes) for optimal enjoyment. To put it simply, this album is bi-winning.

Recorded in September 2010 at "Rape of Harmonies Studios".
Co-engineered and co-produced by Patrick W. Engel and Purgatory.
Mixed and mastered at "Temple of Disharmony" in October/November 2010.
All music created by Purgatory.